We are with you comrade Chandrashekhar 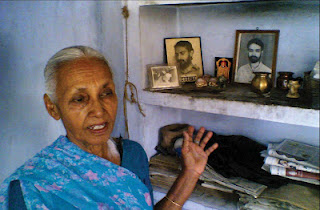 (Just I got a old story on Comrade Chandrashekhar. I am sharing it on the eve of Martyr's Day of A real student's leader)

KAUSHALYA DEVI is not a political leader and she is not rich. Still, she commands obvious respect from the man on the street in this small town in northwest Bihar — whether it is the rickshaw puller or the roadside hawker. After all, her son’s statue
graces the town’s Gopalganj More Chowk.

Chandrashekhar Prasad was an office bearer of the CPI (ML). While studying at the Jawaharlal Nehru University in New Delhi, he was elected president of the student’s union twice. He was 34 when he was gunned down, allegedly by men belonging to Mohammad Shahabuddin’s gang.

Shahabuddin is a member of the Rashtriya Janata Dal (RJD)and represents Siwan in the Lok Sabha. He was recently convicted by a special fast track court in Siwan in two
cases of abduction. Gopalganj More Chowk, a small junction from where the highway to Gopalganj (RJD chief Laloo Prasad’s home) leads off, is now officially called Chandrashekhar Chowk.

“Shahabuddin will surely be convicted and hanged for the murder. It is the prayers of many mothers and widows in Siwan who lost their beloveds over the years by his bullets,” 72-year-old Kaushalya Devi told TEHELKA at her small house in Bindusar village, four kilometres from Siwan town.

The CPI (ML) leadership greeted Shahabuddin’s convictions with great joy, but their enthusiasm is not shared by her. “The party says the convictions are the victory of the downtrodden or the proletariat. There is no such thing. The murders by Shahabuddin were all for political reasons: to capture power.

Like Shahabuddin, it was pure politics for the CPI (ML) too. The same ugly politics continues even today,” she said. It wouldn’t be too much of an exaggeration to say that after her husband, a sergeant in the Air Force, died of cardiac arrest in 1973, she only lived for her sevenyear- old son. She only got Rs 150 as pension but she made sure that her son was educated well.

He first attended the Sainik School in Jhumri-Tilaiya, then went to the National Defence Academy in Pune and then to JNU.“I was sad when he came back to Siwan after finishing his studies at JNU to become a fulltime activist of the CPI (ML),” she said. “But his passion for national politics and sincere love for the poor convinced me that he had a noble purpose in life. Seeing his selfless work, I stopped telling him to take up a government job.

Ten years after his murder, I realise how selfish the political party is.” She lives alone in her two-room house at Bindusar. A visit by a CPI (ML) activist is rare.

“For the CPI (ML), my value as a useful political weapon was over. Today, nobody in the party is bothered about how Chandrashekhar’s old mother lives,” she said. “The party made full use of me during the two-three years after my son’s murder. The CPI (ML) has been thriving on the politics of dead bodies.”

Soon after Chandrashekhar was killed, people from across the country and even abroad flocked to Siwan and participated in processions. T-shirts bearing Chandrashekhar’s image were distributed by the CPI (ML).

“I was very sad to see party cadres, even senior leaders, selling these T-shirts secretly at very high prices,” Kaushalya Devi said. She had returned the Rs 1-lakh compensation given to her by the prime minister.WHEN THE Siwan unit of CPI (ML) decided to install a statue of Chandrashekhar, they asked her to “donate” Rs 40,000.

“They almost forced me to donate the amount. Then they forgot about the statue. After three years of constant complaining, they installed it last year,” she said. She had to complain to the party general secretary Dipankar Bhattacharya to get it installed. “The statue was installed by the people who didn’t even pay for a funeral shroud when his body was brought for the cremation. I had to pay for it,” she said.

She has donated a piece of land close to Chandrashekhar’s memorial for a school and a library. It still remains a dream. “Setting the school up is nowhere in sight. The memorial lies neglected,” she said.

Kaushalya Devi holds the CPI (ML) responsible for her son’s murder. “When there were constant threats and warnings to my son from the Shahabuddin gang, several party workers had been in touch with Shahabuddin.

The party never cared for his security. The CPI (ML) leader who had lodged the FIR after Chandrashekhar’s murder later turned hostile and joined Shahabuddin’s gang,”
she said. “Sometimes, I see the party’s hand in my son’s murder.”

The CPI (ML) leadership says that her charges are “a grieving mother’s emotional outbursts”. The CPI (ML) Bihar secretary Nand Kishore was the Siwan regional secretary when Chandrashekhar was killed. “She is the mother of all the CPI (ML) workers. We respect her highly,” he told TEHELKA. “There is no truth in what she is
saying. The delay in installing the statue was due to the difficulty in finding a suitable site and the fear of Shahabuddin.

As far as Chandrashekhar’s security goes, all CPI (ML) workers in Siwan were under severe threat during those days.” CPI (ML) general secretary Dipankar Bhattacharya was apologetic. “I am unaware of any such activities by party workers.

The party is with Chandrashekhar’s mother, and will look after her well. I will look into her grievances,” he said.

(Chandrashekar Prasad was an Indian student leader from Jawaharlal Nehru University, a president of its students' union and an activist of the Communist Party of India (Marxist-Leninist) Liberation. He was shot dead on March 31, 1997 while addressing street corner meetings in the north-Bihar district town of Siwan in support of a strike called by his party. His assassination led to large student protests in India.
Education
Born at bindusar village in Siwan in a poor kushwaha family, Chandrashekhar was an only child. His father who was in the army died when he was a boy, and his widowed mother worked hard to pay for his education. Following his initial education in Siwan, he studied at the Sainik School Tilaiya. He joined the Indian National Defence Academy but soon left it, telling his mother in a letter that he wanted to be an activist. He joined the University of Patna before joining JNU.
Early years
From early in his student life Chandrashekhar was involved in student activism. In the mid-1980s he became the vice-president of the Bihar unit of the All India Students Federation, the student organisation of the Communist Party of India(CPI).
Soon after, he became disillusioned with what he believed to be the reformist and parliamentarist politics of the CPI and grew sympathetic to CPI-ML(Liberation).
Jawaharlal Nehru University
After joining JNU Chandrashekar played a very important role in the building of AISA, the newly formed student organization of the CPI-ML(Liberation), there.
He was elected to the JNU Students Union three times in a row, first as vice-president in 1993-94, then as president for successive terms in 1994-95 and 1995-96.
As leader of JNU Students' Union (JNUSU), Chandrashekar led a number of different campaigns for students' rights. The old admission policy of affirmative action for students from backward areas was restored. Students thwarted the JNU administration's bid to bring up privatisation in academic council meetings. Chandrashekar made serious attempts to forge close ties with student movements in other universities and institutions.
In 1995 he represented India in the UN-sponsored youth conference in Seoul, where he formed a group of third world representatives inside the conference and moved several resolutions against United States imperialism, eventually staging a walkout in protest. Risking the wrath of Korean authorities, he contacted many outlawed left-wing student leaders and even addressed a huge rally of students on the issue of Korean reunification.
Assassination and Protests

At the end of his stint in JNU, Chandrashekar opted to return to Siwan as a full-time party activist. The Janata Dal (now the Rashtriya Janata Dal), which ran the government in the province of Bihar, had been waging a campaign against leading activists of the CPI-ML. More than 70 people, including leaders of the district committee, had been killed between 1990 and 1996.
On March 31, 1997 Chandrashekhar and another activist Shyam Narain Yadav were shot dead while addressing street corner meetings in support of a strike called by their party.
The CPI-ML (Liberation) alleges that the assassination was carried out at the behest of Mohammed Shahabuddin, the then Member of Parliament from Siwan who belonged to the Janata Dal.
There were protests of thousands of students against the assassination in Delhi as well as in Bihar. Students participating in one protest in Delhi were illegally fired upon by Sadhu Yadav, the brother-in-law of the then Chief Minister of Bihar.
Memorial

In JNU one of the four G Parthasarathi Endowment Fellowship is awarded in the memory of Chandrashekhar Prasad . The fellowship of Rs.1000 per month, awarded to students initially for a period of one year, renewable by another year on the basis of academic performance, is granted students coming from economically weaker sections of society, particularly Scheduled Caste/Scheduled Tribe/Backward Class, and disabled students. )
प्रस्तुतकर्ता Satyendra PS पर 12:16 PM