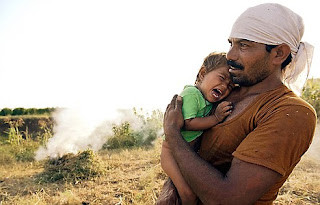 Email ThisBlogThis!Share to TwitterShare to FacebookShare to Pinterest
लेबल: अजब-गजब 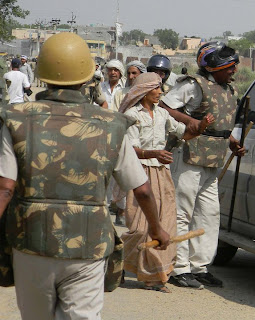 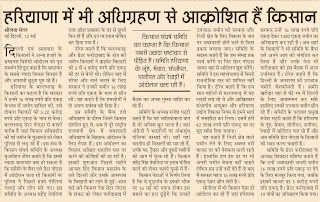 Mining the farmer for all his land

When it comes to acquiring land from farmers, it is a race to the bottom as far as political parties and industries are concerned.

The farmer is never the winner when his land is acquired, whether in a state ruled by the Congress or the BJP, both of which have rushed to the support of the farmers who are resisting land acquisition in Greater Noida, close to this metropolis, in Bahujan Samaj Party-ruled UP.

The rate offered by the Congress government in Rajasthan in Jalore is a mere Rs 6.8 per sq metre, says Rajesh Tikait of the Bharatiya Kisan Union.

In Greater Noida, the price offered is Rs 900 per sq metre, while it is Rs 570 per sq metre for land taken to make the Yamuna Expressway. Tikait says this uniformity among all parties in their attitude to farmers has led them to stay away from forming any alliances with them.

What is also common to all political parties which have protested against the Uttar Pradesh government is that they have all offered the new Land Acqusition Act as the solution for the problem. The Land Acquisition Act Amendment Bill has been pending in Parliament for three years. The first draft was made by activist Medha Patkar and presented in the National Advisory Council in 2006 during the first UPA Government. However, though this draft was recommended by the NAC led by Congress president Sonia Gandhi, it was replaced by a fresh draft in 2009. This was merely an amendment Bill, rather than a new law as proposed by the NAC.

Core issue
Says Patkar: “Political parties, including Congress and UPA, are projecting this British law as the solution for all ills on land acquisition. But how can it solve the problem of undemocratically planned development?”

She said the earlier draft she had made for the NAC had looked at planned development, rather than making farmers and land owners the pawns for someone else’s development.

Resistance to land acquisition has been manifesting itself either in court battles as in Kanjhawla in Delhi or in the form of prolonged agitations as is going on in Tamil Nadu, where 2000 farmers and villagers went on a hunger strike for 10 days this month against acquisition for private companies.

Farmers from Kanjhawla, who addressed the media today in Delhi, said that they did not want any price in lieu of land. “We won’t sell the land, for it is the only capital we have. It feeds us through the year and through generations. But a few crores won’t feed us indefinitely,” they said.

“They don’t want to sell land at any price,” says Patkar, who is supporting the farmers. Farmers, she said, are now asking not for better rates but for a part of the developed land, for nothing can be a substitute for land.

She said the violence in Greater Noida was nothing but an echo of the violence of the state in aggressively taking away the land belonging to villagers without consulting them.

“We are not justifying the violence of the people. But the state has to be more responsible,” she said.

Krishan Bir Chaudhury, president of the Bharatiya Krishak Samaj, a pro-Congress group, says despite an assurance by Congress president Sonia Gandhi at the chief ministers’ conclave last year that agricultural land would not be acquired, all the land being acquired in Haryana was agricultural. “The land acquisition that is going on is nothing but an assault on the food security of the country and all will pay for it one day,” he adds.

“Governments are treating farmers’ land as an agriculture produce for which they fix the price and then the same land is sold at market prices. Earlier farmers did not understand this, but now with their children being educated they can read how they have been cheated all these years,”

New Delhi: State governments behaving as ‘profiteers’ seem to be reason behind farmers’ agitation in the NCR that even led to the recent bloodbath in Greater Noida. While the governments have claimed that farmers are overlooking what pushed their land prices, land owners alleged the states are selling their land at exorbitant price to private players after buying at a very low price.
The complaints are same, whether it is in Greater Noida in UP or Kharkhoda or Faridabad in Haryana. It’s not much different in Delhi. Farmers’ bodies in the capital have been blaming the DDA of raking in huge profits by auctioning the land that the agency had acquired from them at throwaway prices.
Despite Haryana revising its resettlement and rehabilitation (R&R) policy to push the land acquisition in the state by offering the highest financial compensation (maximum of Rs 70 lakh per acre), farmers have been protesting against farm land being taken for industrial development.
“Governments are treating farmers’ land as an agriculture produce for which they fix the price and then the same land is sold at market prices. Earlier farmers did not understand this, but now with their children being educated they can read how they have been cheated all these years,” said an activist Bhupender Singh Rawat of Jan Sanghrash Vahini, who was involved in the Ghodi Bachhera protest in Greater Noida.
Those who have been attending farmers’ protest in this region also pointed out how the official allotment rate in Greater Noida is in the range of Rs 15,840 and Rs 42,560 per sq m and how rates for commercial land allotment have been revised and now range between Rs 60,500 and Rs 1.37 lakh per sq m.
“The government notified land in 124 villages in Greater Noida nine years ago to connect Noida and Greater Noida with an expressway. It paid farmers Rs 50-300 per sq m. Today, in the same location, a private developer building Yamuna expressway and a 2,500-acre Sports City is selling plots at Rs 15,000 per sq m,” said Col Devinder Sehrawat, secretary of Delhi Gramin Samaj.
He added that when farmers see in front of their eyes how they have been ‘looted’ and private players are making huge
profit, they feel cheated. The land is being sold at 13-14 times more than that of the price the government paid to farmers.
Though the disparity is much more in case of Delhi where DDA is selling an acre of prime land at Rs 200-300 crore, it’s sparking no Noida-like protest. This is because most of this ‘land bank’ was created after acquisition of mass land decades ago.
The present compensation rate of Rs 53 lakh per acre in Delhi is also nowhere close to the rate at which DDA has been auctioning properties.
After Haryana brought progressive change in its R&R Policy, which included annual annuity payment to the farmers for 33 years, UP came out with even more popular policy. Though it announced to give a portion of the completely developed land to the affected farmers, things seem to be on the slow track.
courtesy: http://epaper.timesofindia.com/Default/Client.asp?Daily=CAP&showST=true&login=default&pub=TOI&Enter=true&Skin=TOINEW
प्रस्तुतकर्ता Satyendra PS पर 9:21 PM No comments:

‘I owe my life to 3 caring villagers’

Greater Noida: Devender Singh, a police constable from Meerut who was grievously injured in the clash between the police and farmers in Bhatta Parsaul village, owes his life to the three villagers who saved his life and helped him escape.
Constable Devender Sigh had been called on duty at the last minute to Bhatta Parsaul and got caught in exchange of fire between the police and the farmers. He was then overpowered by the villagers in the confusion that followed after the district magistrate, Deepak Aggarwal, was shot. Singh recalled, “I was surrounded by the villagers who snatched my rifle and my wallet from me. Then they beat me on the head repeatedly with a bamboo stick. After the third blow, my helmet broke but they didn’t stop and kept hitting me on the head and then I collapsed.”
“I was on the ground and I could see some villagers with a revolver near me. Others were coming towards me with a bamboo stick that had a knife attached at the end. It was at this moment that I thought I was going to die. But three villagers stopped them and convinced them to spare me life,” said Singh, who is currently admitted in Kailash Hospital in Noida. He has 18 stitches on his head and numerous other injuries. Doctors added that he is currently out of danger.

Bhatta Parsaul On Edge After Brutal Crackdown By Cops, Police Round Up Men, Others Flee

Greater Noida:A day after the clash between the administration and farmers, where two policemen and two farmers lost their lives, Bhatta Parsaul village remained tense, engulfed in the aftermath of Saturday’s violence.
Incidentally, of the 7,000 inhabitants of the village, only women, children and the elderly remain — all its men have either been allegedly rounded up by the PAC or have fled the village.
According to the womenfolk in the village, soon after the district magistrate was taken to the hospital and senior officials followed him, the several hundred Provincial Armed Constabulary (PAC) personnel and local policemen manning the village went berserk. They ransacked their homes, allegedly looted some shops, set fire to whatever village property they could lay their hands upon and dragged all men out of their homes, beat them up mercilessly and took them to some unknown destination. Those men, who could manage, fled from the village.
“Last evening around 6 pm some policemen entered my house and began beating up my husband and son. They then dragged them outside and asked the rest of us women to remain inside. My husband and son have not returned since,” said Gulchaman, a resident. “I do not know whether they are injured and have been taken to hospital or if they are dead,” she added.
Most of the women in the village echo Gulchaman’s tale, unsure whether the male members of their family have been taken away by the PAC, have been injured in the agitation, or have simply fled to some safer spot.
Not only were the policemen brutal on the men they could lay their hands on, they even did not let the injured elderly go out of their houses for treatment. It was only after media persons reached the village on Sunday morning and complained to senior cops that the injured elderly men were taken to the hospital in Noida in the afternoon.
Fifty-year-old Parveen Bano’s three sons, Yakub, Aleem and Shameem, fled along with several other men as soon as the PAC personnel began rounding up the villagers. On Sunday evening, she received a call from her eldest son Yakub, informing her that he was injured and recuperating at Kailash Hospital in Greater Noida. She has no information on the whereabouts of her other two sons.
“The policemen spared no one, they beat up all our men folk, misbehaved with the younger women, beat up the elderly and left them to die inside their homes while they took our men away. Those men who could manage, fled the village and all that we can do now is to pray that they are still alive,” she said.
courtesy : http://epaper.timesofindia.com/Default/Client.asp?Daily=CAP&showST=true&login=default&pub=TOI&Enter=true&Skin=TOINEW&GZ=T
प्रस्तुतकर्ता Satyendra PS पर 9:50 PM No comments: 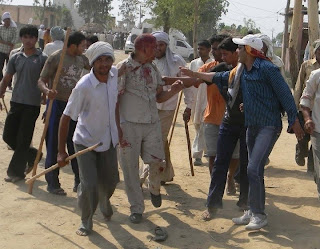 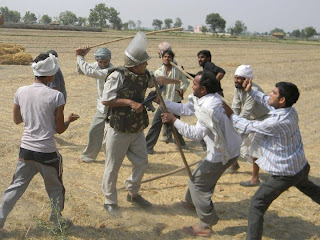 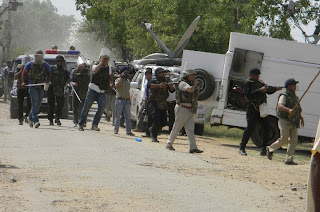 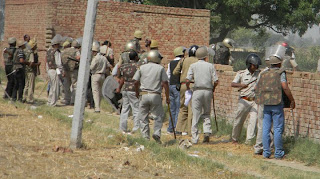 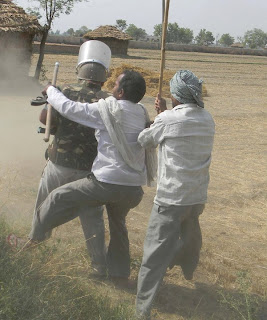